Happy Book Birthday @catherinecowlesauthor 🤩
#Darkromtober October 3: “Do you want to play a game?” (Mask play)
September Haul
How is August treating you?
I CANNOT BELIEVE IT’S THE LAST DAY OF #AbsCoversOfJuly 😭 but I am loving that my feed is alllllll the abs!!
🔥 #AbsCoversOfJuly 🔥

Adrienne Young was a wonderful surprise! She spoke about her passion for feminism, and how a feminist theme is present throughout the whole book. Also, she talked about the ruthlessness of the main character (breaking our typical female gender role), which is right up my alley. Another goal was to write a ya story that didn’t feature so many of the same tropes, such as a romance as the end all, be all. I’m just overly excited for this book! 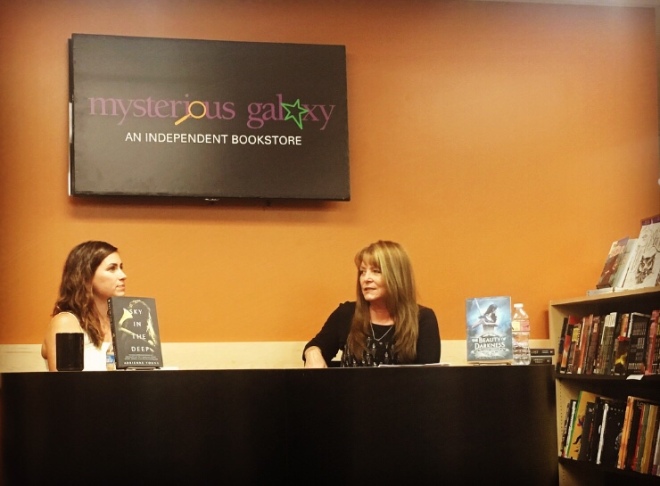 Adrienne was also in conversation with Mary E. Pearson, author of The Remnant Chronicles, and upcoming book Dance of Thieves (out August 7, 2018, Signing at Mysterious Galaxy on Release Day). Mary E. Pearson was so sweet and excited about Sky in the Deep. She said she wanted to ask questions that she would want to be asked, and I think she did a wonderful job.

Sky in the Deep Synopsis:

Raised to be a warrior, seventeen-year-old Eelyn fights alongside her Aska clansmen in an ancient rivalry against the Riki clan. Her life is brutal but simple: fight and survive. Until the day she sees the impossible on the battlefield — her brother, fighting with the enemy — the brother she watched die five years ago.

Faced with her brother’s betrayal, she must survive the winter in the mountains with the Riki, in a village where every neighbor is an enemy, every battle scar possibly one she delivered. But when the Riki village is raided by a ruthless clan thought to be a legend, Eelyn is even more desperate to get back to her beloved family.

She is given no choice but to trust Fiske, her brother’s friend, who sees her as a threat. They must do the impossible: unite the clans to fight together, or risk being slaughtered one by one. Driven by a love for her clan and her growing love for Fiske, Eelyn must confront her own definition of loyalty and family while daring to put her faith in the people she’s spent her life hating.